What is leadership? Leadership is the ability to encourage and lead people who believe in you. A leader is a person who stays on the head of the particular group of individuals and makes important decisions for them. What is more, he is responsible for his people, whereas they provide him with the right to represent their collective opinion. The primary duty of every leader is to unite his group and help them reach their goal. As you see, it is complicated to be a good leader, and there are very few examples of the outstanding leaders, whose experience one wants to follow.

Mahatma Gandhi is one of the brightest examples of real leaders who managed to save the entire nation and show a new way of development to millions of people. 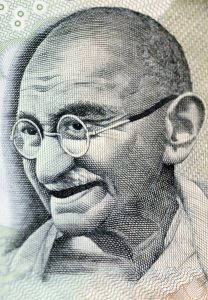 Mahatma Gandhi is probably one of the most recognizable and famous personalities in the world history. There is hardly anyone who has never heard this name. What is the source of this popularity? The answer is obvious. Mahatma Gandhi is supposed to be the Father of the Hindu Nation. He is the one who helped his people receive independence. No wonder, this personality is globally respected and appreciated. Besides, modern sociologists begin studying Mahatma Gandhi’s leadership style. How did he manage to unite his people? Why did they believe in his professionalism and authority? I have decided to analyze the leadership style of Gandhi and answer to these thought-provoking questions.

Many people can think that Gandhi was a charismatic person. I should admit that this statement is disputable. According to the scholars who studied the Father’s biography, he was a timid person. When the leader received education at school, it is hard to hear at least a word from him. He was afraid of speaking with other children and always stayed alone because of his shyness. This trait of the character remained until the end of his life. So, how did he become so influential? Strong character or showy behavior are not vital factors anymore. One can win public credit and respect with the help of the proper deeds.

It is important to emphasize the origin of Mahatma Gandhi. He came from quite a wealthy family. His father occupied an important position in his state. Everybody knows that the source of this kind can spoil people. When one does not have any financial problems, he will hardly think about others. Fortunately, Mahatma was different. Furthermore, the family was very religious and respected traditions of India. On the other hand, he was very wise since he borrowed the best elements from different religions including Buddhism, Christianity, and Islam. He said that these religions had the same roots. This wisdom helped him become patient and make friends with everybody. As a matter of fact, Gandhi was a vegetarian and did not consume alcohol and never smoked. He kept his body and soul pure and balanced.

Before World War I, India was under the strong influence of the British Empire. In fact, the war changed the existing world order. Many nations decided to struggle for independence. The Hindu people were not the exception. Mahatma Gandhi wanted to save his people and designed a particular strategy. First of all, he rejected the policy of violence. The leader realized that every violent protest would be crushed severely. What is more, the British government expected enraged Hindu protests to imprison their leaders at once. Thus, Gandhi chose the policy of nonviolence. This method was beneficial. On the one hand, people opposed the existing official rules and laws but in the advanced and peaceful form. It is hard to accuse them of doing anything wrong. I dare say, the leader cared about his people and tried to avoid victims. He also shared the fate of his supporters imprisoned. Mahatma Gandhi spent two years in jail too. It was reasonable from his side to suggest the policy of boycotting. Hindus boycotted various British products and preferred buying goods manufactured in India even though their quality was lower. This system caused stable harm to the economy of the Crown. Gandhi was good at making friends due to his strategy of nonviolence. Many politicians and public organizations supported him whereas his peaceful methods were not harmful to anybody. We should emphasize that the leader cared about the sovereignty of the entire India and he did not support the division of the country into India and Pakistan.

Mahatma Gandhi was a talented and great leader who encouraged his people with his example. This personality not only motivated Hindus but also spent time in prison for his views and finally died from the opponent’s hand. No wonder, the memory about Gandhi will live forever.